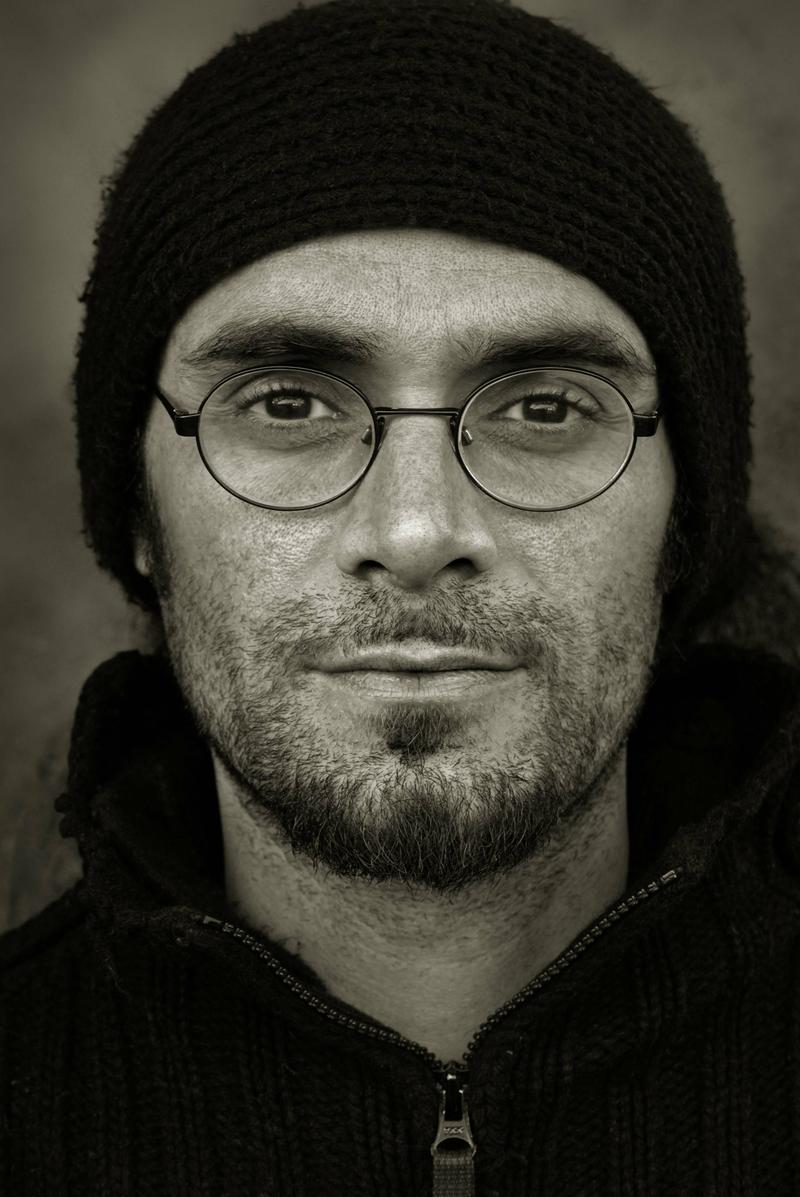 Fabrizio Pozzoli was born in 1973 in Milan. Besides his scientific studies, he boasts an experience as assistant scenographer. He attends various stages in the United States and England. He makes researches in the graphic and writing fields and is trained at the School of Comics in Milan, where he achieves precise abilities in the anatomical representation of the shape he will always be faithful to. Since the end of the nineties he works to tridimensional metal sculptures, created with iron wires, generally protected with silicon, but sometimes intentionally left to rust corrosion (plumb layers and mirrors). Between 1998 and 1999 Pozzoli lives in London and Windsor. His exhibitions are frequently given a form of installations of various shapes linked by a common theme. In 2002 some of these shapes draw up on the inside or rise from architectural structures made of iron mantled with rust: they are the prodromes, in terms of study, of a wider conception of shape in the space as scene, that have recently resulted in the representation of theatre events around Pozzoli’s life-size sculptures. The iron wire is often accompanied by copper wire, with an increase of the dramatic imprint or as  indicator of the eye trips over the shape’s body. An increase of the luminaristic impact is also obtained by coating the materials with zinc. In 2005 he starts to work on oversize sculptures, no longer only concentrating on the whole body but also on the face and its features. From 2007 Pozzoli starts to include the element of rust in his work, which he achieves through the natural oxidization of metal when exposed to the elements. In 2008 his personal exhibition OVERSIZE at the Montrasio Arte Gallery di Milano is enhanced by pictures taken by the renowned photographer Gianni Berengo Gardin, who portrays the young artist at work in his studio. Pozzoli spends three months in New York at the HSF residence for artists, where he holds a personal exhibition. In 2009 he comes third in the Premio Arti visive San Fedele in Milan. He features in the catalogue Gianni Berengo Gardin – Reportrait , amongst the culture personalities of the XX century portrayed by the celebrated photographer. The catalogue is connected to a major exhibition at the Palazzo Penotti Ubertini in Orta San Giulio (NO). on the occasion of the Milo Manara exhibition in Venice, at the Palazzo Querini Stampalia, Pozzoli is asked to create four sculptures as a tribute to the great illustrator. In 2010 his work is the subject of some pictures shoot by the Austrian photographer Andreas H. Bitesnich, who portrays Pozzoli in his studio, surrounded by his sculptures. In 2011 Pozzoli starts a series of pieces based on the combination of wire figures and new materials, giving rise to new reflections on the individual and his interaction with the social context. Also from this period are the iron-plated panels, on which Pozzoli draws shadows playing with the chromatic effects caused by the oxidization of metal. Fabrizio Pozzoli has shown his works in Europe, America and Asia. He lives and works in Milan.

exhibitions (of the last three years)